What is Ivermectin used for?

Ivermectin is mainly used to recover from many types of parasitic infections which are as follows:

How does Ivermectin work?

The working mechanism of Ivermectin is a two-step process. Firstly, it paralyzes the worms or microorganisms that cause infections. Secondly, it kills those bacteria, parasites, or microorganisms & leads to be an effective cure. Besides this, Ivermectin slows down the multiplication rate of the causative organisms & boosts the healing process. Thus, patients with parasitic infections see early recovery while using Ivermectin for treatment.

How to use Ivermectin?

Ivermectin tablets are consumed orally on an empty stomach with a glass of water. Make sure you’re drinking a lot of fluids & avoiding caffeine while undergoing treatment with Ivermectin. Ask your doctor if you need further dosage guidance.

Side Effects of Ivermectin

Irritating skin or burning sensation may be experienced among the patients using Ivermectin.

What dosage of Ivermectin is right for me?

Ivermectin tablets & lotion are available in the market. Only a doctor can prescribe whether you should take Ivermectin 6mg or 12mg dosage depending on the severity of infections you’re suffering from. If you’re prescribed lotion, your doctor will guide you regarding what portion should be applied & when.

Can I buy Ivermectin as an OTC pill?

Ivermectin isn’t available over the counter. It is an on-prescription medicine that should be consumed as prescribed to ensure safe usage of this parasitic treatment. Overdosing this medicine might not bring instant relief, but may harm your health & that’s why it should not be used based on self-assumptions.

What happens if I miss or skip Ivermectin dosage?

This anti-parasitic medicine isn’t your regular medicine & it should only be used for the prescribed term by your doctor. If you miss, skip, or forget using Ivermectin, you may use it as soon as you remember. If your next scheduled dosage is near, you may not use it immediately, but consume it according to the near schedule. Also, don’t stop using Ivermectin until your doctor signals you to do so.

Is Ivermectin safe for me?

Ivermectin is a safe medication used for parasitic infections. However, if you’re suffering from any severe health issues or taking other medicines already, make sure your doctor knows this. It helps them to determine whether Ivermectin & its ingredients are safe for you. Disclose your allergies while Ivermectin is being prescribed so that you’re saved from any adverse effects later.

“I had intestinal tract infection a few weeks back & my doctor prescribed me with Ivermectin. I completed the entire course of Ivermectin & hopefully I’ve recovered faster.” 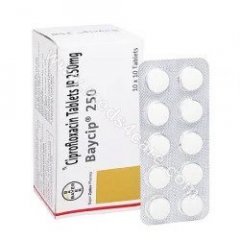 Free
Ciprofloxacin Tablets
Buy Baycip 500 MG is an antibiotic medicine that contains ciprofloxacin. It is used for the treatment of bacterial infections that affect your sk..
$0.00
Ex Tax:$0.00
Add to Cart
Add to Wish List Compare this Product
Buy Now Ask Question